In the summer of 1965 I had heard that Harry Belafonte was interested in black artists and was collecting their work.  I went to his offices on West 57th Street where his secretary told me that his business manager, Sy Siegel, bought all of his paintings for him.  So I took several of my paintings from the American People Series to show to Mr. Siegel.  One was Mr. Charlie, a large grinning head of a patronizing white man. Another called The Cocktail Party was a social gathering with one black person.  The final canvas I brought was The American Dream, which presented a woman, half white, half black, showing off her huge diamond ring.  Mr. Siegel turned red.  He growled menacingly: "I don't know who these people are." Waving his hand at the paintings, he went on angrily.  "And I don't know what they're doing."  (He was looking at The In Crowd, a scene of white men piled in a power pyramid with black men on the bottom.) 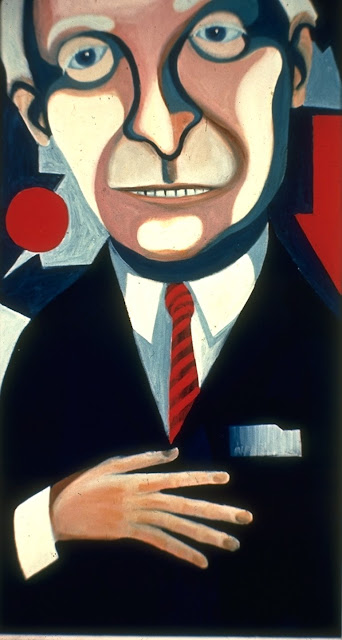 I tried to explain the scene to him.  "You see the white man has his hand on this black man's mouth because he doesn't want him to speak out about the injustice in the black community.  We call him 'Uncle Tom,' and we call him"--pointing ot the grinning white face--"Mr. Charlie."

"Well, you wanted me to see them and I've seen them," Mr. Siegel thundered.  He turned and left the outer office, slamming the door in my face."

Faith Ringgold, from WE FLEW OVER THE BRIDGE: THE MEMOIRS OF FAITH RINGGOLD, Duke University Press 2005, (148-149)

Posted by Michele Wallace at 10:39 AM

Labels: Faith Ringgold, Mr. Charlie, We Flew Over The Bridge